This is the first of the training weeks in my PhD with TRUSS, new places, new people and lots of new experiences. Do you want to be part of it?

I went from Manchester to Nottingham by train, arriving in the late afternoon. I wanted to go directly to the hotel, but I had to round because I missed one street. Despite I was tired, the extra time I needed worth it. The night, next to the city centre, was full of live and colour. The early bird customers for Christmas were doing the shopping. A very big Christmas tree was in the middle of the old market, threatening the ice skating rink and some of the markets of falling over them. Pisa tower seemed to be safer compared to it.

Finally I arrived to the hotel where Barbara (ESR8), Sofia (ESR1) and me (ESR12) were staying. We went to have dinner to a pub close to the hotel and after that we planned to arrange the following day for breakfast in the hotel and organise the places and the schedule we were going to have. Then, time to sleep.

Having had breakfast, we went for the necessary staff for our first Training Week day and we took the 34 bus. The traffic was very high, something that I did not expected before. Thankfully the public transport has its lane for avoiding these problems and I spent the trip making fun of Barbara because of the stop in which we had to leave the bus.

When we arrived to the training week room we met the rest of the TRUSS fellows, a lot of them the first time: Alberto Gonzalez Merino (ESR3), Farhad Huseynov (ESR7), Matteo Vagnoli (ESR9), JJ Moughty (ESR10), Antonio Barrias (ESR11) and Federico Perrota (ESR13). The rest I knew were also there: Rui Teixeira (ESR4), Giulia Milana (ESR6) and Siyuan Chen (ESR14).

This day we started with a one hour lecture from Loreto Manriquez, telling to us about important information regarding the TRUSS´ grant. All the guidelines, the working scheme and the structure were displayed, including the place and the time scheduled for the following Training Weeks and other dates for the delivering of our later Personal Career Development Plans (PCDP).

After that we had the first lecture with Dr. Luis Neves concerning the topic of “Methods of Safety Quantification”. Here we were introduced to some ways of taking into account some margins when building a structure. The most typical way of doing this is to multiply the results of our calculations regarding the coefficients that we assign to the situation regarding the uncertainty that we have in our situation. For example, in the steel we have a very low safety coefficient because is a well known material but if what we are analysing is the soil, the coefficient can increase dramatically. A better safety quantification can be done using probabilistic methods considering the risk of the structure to fail. When the area of failure have something in common with the area of resistance we can calculate the risk that we have and see if it is fine or not.

Then, when the coffee break was finished, Dr. Tony Parry told us about the “Life Cycle Assessment”. Using as an example the bag of crisps we were introduced to the new view of the CO2 problem and which are the steps that we need to do this bag. Surprisingly, almost everything that we have to do for creating that bag makes CO2 emissions, increasing the greenhouse effect.

After and incredibly well organised lunch, the second lecture of Dr. Luis Neves took place. This time it was concerning the “Reliability Analysis”, so it could be considered as the continuation of the first lesson.  The main concept here was that when we are building a structure we cannot assume a 100% safety because of the cost of all the process. This means that when we are talking about construction the life of one person worths money in some way because of the probability of failure which we are assuming for the building. Depending of the gravity of the consequences of that failure we can allow more or less probability.

The last lesson of the day was regarding “Overview of fault diagnostics methods” was given by Dr Rasa Remenyte-Prescott. Here we were told about a new probabilistic method using the “tree” scheme and displaying different probabilities of occurring something. Then, after applying a simple formula we can make the estimations. In this lesson the example of a fire alarm sounding was used, splitting probabilities of occurring a real fire or a simulation, if it works or not, etc.


At last, we were introduced by Prof. Eugene OBrien the case study of the bridge for its maintenance and using sensors or whatever we want in order to ensure its serviceability for one more year.

Then the ESRs talked about arranging for dinner, so we were able to know more about our mates. We did it in a good hamburger restaurant and after that we went to a pub. The following day was going to be a long travel.

In the second day we went to Chatsworth house for  a cultural visit. Here  incredibly big gardens could be seen surrounding the main building which was where the Devonshire Duke was living since 1549. It was a very nice day to enjoy the views and know even better the TRUSS mates. Lots of fun, including the discovering of the lost golden sausage. Not bad at all! 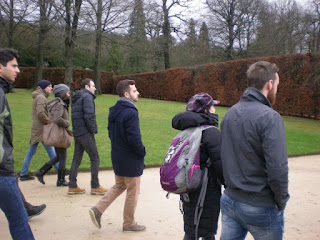 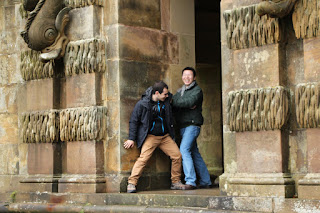 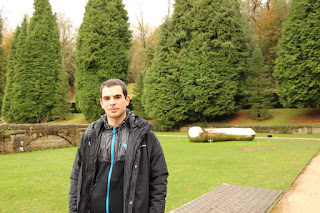 After the trip, another dinner with Sofia, Barbara, Rui and Farhad.

The first lecture of this day was the last one of Dr Luis Neves concerning “Updating of random variables using on-site information”. Taking as a reference a Portuguese bridge we were introduced deeper in the safety features concerning statistical methods. The final conclusion of this lesson is that, when taking a little more effort using these methods, we can ensure that the structure is safe whilst using other ways we can obtain an unsafe structure, fact that can save money for repairing.

The two following lectures were given by Alison Johnson and they were about “Planning your research” and “Presentation skills”. In the first one we were told about defining clearly our objectives during our time as a PhD student. When we define our ideas and we have this little of creativity for making something new, the task is going to be easier for us. It is important that we realise that it is a difficult and demanding task.

The second one started more or less in the same way. We had to display the characteristics that we considered important for doing a good presentation. After having done a huge list, the final conclusion that we arrived to is that we need always a second plan to avoid problems when presenting and know the slide that goes after the one that you are presenting. These two points are essential for a good presentation.

After Alison Johnson lessons and a good lunch, Dr. Ciaran McNally lectured about “Material modelling”. Very simple material analysis, including tensile strength of different materials and good use of them were displayed.

The working day finished with the meeting for the study case of the bridge with Rui, Matteo and Giulia.  Some little ideas came that day, but knowing than the main part has to be done the day after.

Finally, the TRUSS team had the dinner in a very good restaurant called “World Service” next to the Nottingham Castle and the Robin Hood statue after having gone to the oldest pub in Nottingham.

This day was scheduled for making our research presentations. In my case I did my presentation about my project in the ESR12 “Bridge Damage Detection Using an Instrumented Vehicle”. My exposition about the Traffic Speed Deflectometer (TSD) and the methods using MATLAB simulation was made.

After that, my DSP meeting was done. Some new ideas for my skills development and some of the written ideas were improved to clarify the goal or to define a more realistic deadline.
While other group mates were in their DSP we continued preparing the bridge group case for the next day.

I our last dinner the ESRs went to a Spanish restaurant and after that we finished in a pub inside a church. Very good atmosphere inside, something unusual that I had never seen before.

In our last day in Nottingham, we had some more lectures and the presentation of our case study. The first lecture of the day was given by Dr. Marius Vileiniskis concerning the continuation of the Rada´s lesson “Overview of fault diagnostics methods”. Some graphical methods of probability with areas for checking some kind of behaviour were displayed among other staff.

The second lesson was given by Prof. Eugene OBrien and it was about “Load Modelling”. In this lesson we were shown the basic steps for analyse bridge traffic loading: Get Weigh in Motion (WIM) data, Montecarlo simulation, convert weights to load effects, extrapolate and make allowance for dynamics.  Special importance has the statistical methods when talking about load analysis.

The third and last lesson, lectured by Prof. James Brownjohn regarding “Structural Health Monitoring”, has shown some practical examples about some damaged bridges and the repairing possibilities that can be applied on them. The most important idea was that there is not only on possibility for doing that task, a lot of valid possibilities can be done.

Finally, the case study was exposed. After some discussion, we realise that between all the sensors that could be applied there are two very important: the inclinometers in the columns for analysing the extra bending moment that the bridge could be suffering and the strain gauges in the mid span of the existing spans for measuring deflection.

After finishing the Training Week we had to leave to our host places, with the promise to meet again in Santander in June. The return trip was delayed in a very windy day, so the ones that wanted to take that plane, Prof. Eugene OBrien, Dr Arturo Gonzalez and the ESR Sofia, Rui and me, had to show our patience.